Technites Past and Present Talent Showcase 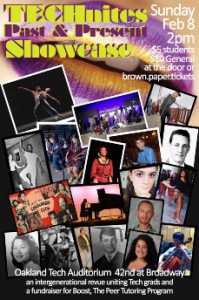 We would like to thank you everyone who joined us on this soggy Sunday for an amazing event! If you weren’t able to attend to witness first-hand this amazing array of Tech Talent spanning seven decades, please view the video clips below of each performance, and check out the photos by Bay Area News Group. You can also click here to view the Talent Showcase program.

A huge thank you to performers (below), volunteers, Fred Trotter, Casey Fern and the Tech Techies! Our beautifully renovated theater with its sophisticated, professional lighting and projection system really set off the show!

The great news! We raised over $3000 for Boost, the Peer Tutoring Program. Anyone interested in finding out more about Boost or how to help support the program can contact Terry Cullinane at DoubleWServices@gmail.com.

Marv Tripp, Class of 1943: World War II was in full fury when Marv graduated Tech. He graduated from The California Maritime Academy in 1945 as a marine engineer.

After his sailing days, he earned a degree in music from The University of Pacific, did some minor TV work in Hollywood, and worked at The Flamingo Hotel in Las Vegas as a house vocalist.

Back in Oakland, he did some singing on local TV before becoming a teacher and later a principal, but Marv still performed as a band singer at various Bay Area dance venues and led his own group for several decades. Marv and his wife raised 3 kids, all of whom graduated from Tech!

The Empty Minded, now an all originals ban, began in 2011. The band has played shows around the East Bay, and their first single, “Louie”, was released in May of 2014. Its members are:

Oliver Van Moon, Class of 2017– drums. Oliver has been playing drums as long as he can remember and currently takes drum, guitar, and bass lessons. He plans to play as many styles and genres as he can, and to share his love for music.

Niko Darci-Maher, Class of 2017– vocals, keyboard, guitar. Niko started playing piano when he was 8 and now studies guitar, piano and bass. He plans to keep playing music and see how far he can go with it.

Patrick Friedman, a beloved social studies teacher at Tech since 2006, sings and plays drums. These days, most of his musical expression consists of performances for his young daughter and duets with his wife, although he will be contributing drums to a recording with some South Bay friends next month. Patrick looks forward to spending more time with his family, and is itching to get back in the saddle again to make music on a consistent basis.

Becky Wolf has taught at Tech for 5 years. She sang throughout her own high school career, in musical theater as well as choir. In general, she enjoys being on stage in any capacity.

Estelle Jung Kelley, 1949: Estelle grew up in the Ming Quong Home, a local orphanage for Chinese girls. When she was 15 and at Tech, she was placed as a live-in maid in a series of Oakland homes. Overworked and mistreated, she still managed to graduate from Tech.

Immediately upon graduation, Estelle got a job at the famed Forbidden City nightclub in SF’s Chinatown. For the next 18 years, Estelle performed at various nightclubs including the Sky Room and Club Shanghai and toured in Canada and the US. For the past 25 years, Estelle has been the director of Estelle Kelley’s Performers.

Edward Nunoo, 2015: Edward began playing clarinet in 2nd grade, oboe in 4th, drums in 7th, and piano in 8th. In 3rd grade he joined the Young Musicians Program at the UC Berkeley Department of Music in which he currently sings bass and is the Principal Oboe.

Michael Grbich, 1950: After graduating from Tech, Michael worked as high school art teacher for 30 years. Michael has devoted his retirement to painting, exhibiting his work, and promoting healthy lifestyles and a joy in life. He took up tap dancing at age 62!

After finding the lessons difficult to follow, he taught himself by watching famous tap dancers perform and by watching instructional videos. A few years ago, he tap danced across the Golden Gate Bridge! He also spends his time walking across a high wire stretched across two rooms of his house!

Omar Abdul-Rahim, Class of 2015, has studied classical music under Rebecca Trujillo since the 2nd grade. He has played a number of benefit solo concerts, including one in November with two of his classmates. Last year Omar was awarded a President’s Volunteer Service Award. He plans to take music theory classes in college and to continue exploring his passion as a pianist.

Originally performed in Spring 2013, 99 Years:The Legends and Legacies of Oakland Tech was written and developed by OakTechRep, the Award-Winning Drama program at Oakland Tech. The script is based on interviews of over 60 Students, Staff, and Alumni, and this scene was performed by:

About 9 years ago, a few of the “older ladies” in a taiko group based in Union City decided to form their own “granny group” and Heiwa Taiko was born! Their average age is 70, with Annie Ong, Class of 1952, the oldest at 81! They play about 25 gigs a year and have played at the Shakespeare Festival in Oregon, the SF Academy of Sciences, Pixar Studios, and the Golden Gate Bridge 75th anniversary. They made their 4 large drums out of wine barrels!

Akiro Duey, Class of 2015, has studied cello since age 6 and is in his 5th season with the Young People’s Symphony Orchestra (YPSO, the oldest independent youth orchestra in California and the second oldest in the US.)

Akiro has toured with the YPSO in Central Europe and on the East Coast, including a performance at Carnegie Hall. He hopes to continue playing cello at college.

Omar Shabazz, Class of 1989, was assigned to a dance class while at Tech by mistake. The day Omar checked out the after school dance club, Oakland Ballet’s director, Ron Guidi, was a guest teacher. He invited Omar to his class at Oakland Ballet School and after his very first class, Guidi, asked Omar to learn the “Wooden Soldier Dance” from The Nutcracker! Within six weeks, he was on stage performing with the Oakland Ballet. Over the next 10 years, Omar performed roles in The Nutcracker, Romeo and Juliet, and Petrouchka. He is currently on the teaching staff of The Oakland Ballet School and Ballet Petit in Hayward.

Deon Oddone, Class of 2015: Deon began dancing ballet at age 3 and never stopped! She started at Danspace in Rockridge and moved to Oakland Ballet School the summer before 6th grade. She has spent summers with the Sacramento Ballet School’s Intensive and has performed in many shows including The Nutcracker where she has had roles like Rose Queen and ballerina doll. She met Omar at Oakland Ballet School and has found him to be both an amazing teacher and a great mentor.

Tech’s Poly Club was founded in 2008 by students who wanted to learn, practice, and showcase elements of the cultures of the Pacific Islands. The Poly Club has won numerous awards at competitions and even danced at halftime for the Golden State Warriors in 2013.

The OTHS Dance Ensemble, including intermediate and advanced students, performs a routine to “Jump, Jive ‘an Wail” by Louis Prima, with choreography by Dance Instructor Sonja Travick.

This rendition of George Gershin’s “Summertime is performed by the Oakland Eastside All-Star Jazz Ensemble, including current students: